Mother’s Day – the most popular day to dine out

75 Million Americans Expected to Dine Out on Mother’s Day, According to the National Restaurant Association

Mother’s Day remains the most popular holiday on which to dine out.  According to new research by the Association, nearly half of moms would pick their favorite restaurant if she were to choose where to go for a special Mother’s Day meal. And, more than half of mothers say they enjoy celebrating Mother’s Day with a restaurant meal because it gives them a break from cooking at home.

“Restaurants are at the center of Mother’s Day celebrations, providing moms much-needed reprieve from the chore of cooking at home to instead spend quality time with their family and friends,” said Hudson Riehle, senior vice president of the Research and Knowledge Group for the National Restaurant Association. “Great gift suggestions include taking her out to her favorite restaurant on Mother’s Day, as well as giving her a gift card to that restaurant for future use.” 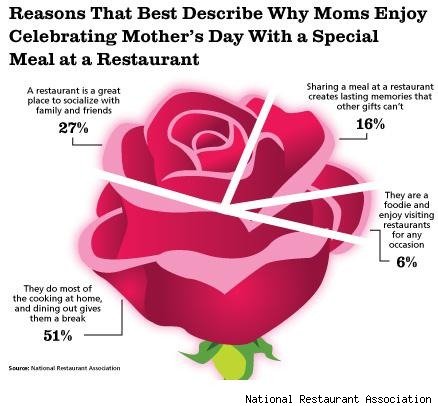 When asked about where they would like to dine for that special Mother’s Day meal, 46 percent of moms said they would prefer their favorite restaurant, regardless of holiday specials. Twenty-two percent would prefer to celebrate at a restaurant that is kid-friendly, 19 percent find Mother’s Day specials most important factor, and 11 percent would like to visit a restaurant they haven’t been to before.

The survey also showed that restaurant gift cards and certificates are popular on mom’s wish list. Approximately one-fifth of mothers (19 percent) said that is their preferred gift this Mother’s Day.