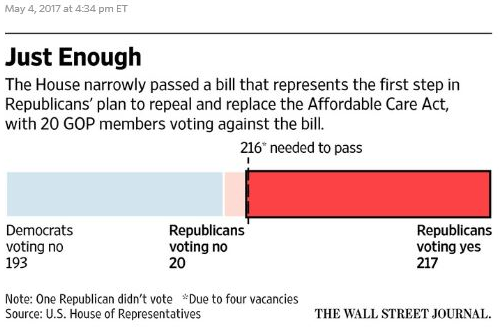 Much of the coverage of the repeal effort fails to discuss two important aspects – the impact on employers and how much the Senate will need to change the law if it is to pass.

The vote was incredibly close in the House.  8% of House Republicans voted against the Bill.  If that occurs in the Senate there is no way the Bill will pass.  So, expect the Senate to rewrite much of the Bill.

What about Pre-existing Conditions?  What about Medicaid?  Until the Senate has their turn rewriting the law all provisions are up for negotiation.  For now, employers should have an idea of the major provisions in the Bill.  However, they should take no action yet.  Until this legislation is passed by the U.S. Senate and signed into law by President Trump, all existing ACA requirements remain in effect, including penalties for noncompliance.

Click here to read the American Health Care Act in its entirety.

The information in this article is made available for general information purposes only. It is not intended to provide specific regulatory, scientific, or legal advice. The content must not be relied upon as a sole source to determine regulatory compliance or any obligation under state or federal law. We advise consultation with outside legal counsel should you require further information.